Few subjects generate as much discussion as that of food. And such discussion is increasingly marked by suspicion and pessimism about how our food is produced. In 2013, Henk Wildschut (NL, 1967) was invited to make an in-depth study on the subject of Food for the Rijksmuseum in Amsterdam. Full of preconceptions about the food industry, Wildschut viewed it as dishonest, unhealthy and unethical. More than that, it was contributing to the decline of our planet, unlike in the good old days. He was hopeful that the magic word ‘organic’ was going to solve everything. So when he embarked on this project, his first impulsive reaction was to bring to light all the misunderstandings about food, once and for all.

After two years of research and photography, Wildschut realised that the discourse on food production can be infinitely refined which often puts supposed advantages and disadvantages in a new light. For example, scaling-up can actually enhance animal welfare, and organic production is not always better for the environment. Often, an excessively one-sided approach to the subject of food is a barrier to real solutions. Food is simply too wide-ranging and complex a subject for one-liners or to be described in terms of black and white. 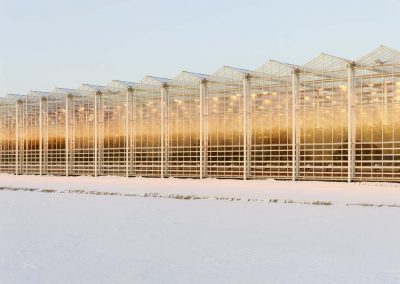 In 2011, CombiVliet set up a production facility in Wieringermeer where it grows only tomatoes. The greenhouses are artificially lit from October to March for a total of 2,250 to 2,500 hours. The electricity the company needs to light the 240,000m2 comes from the general energy grid. In the service building alongside the greenhouse, an energy company has installed combined heat and power plants to generate electricity which is then fed into the grid. The residual heat – normally an unusable waste product of energy generation – is used to heat the greenhouse. An additional advantage is that the waste gas CO2, released when energy is generated, is absorbed by the plants, thereby improving their growth. 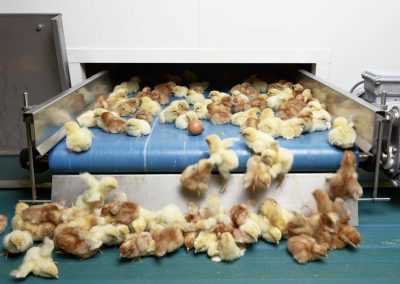 In 2011, Verbeek Hatchery Holland opened a new facility in Zeewolde with a capacity of 30 million day-old chicks a year. An amount that accounts for almost half the Dutch market for layer chickens. Between 30-40% of this annual production is destined for export. As well as countries in Europe, Verbeek exports to the Middle East, South Africa, and further afield. Of these, 8% percent of the chicks end up in the organic market and 92% end up in the regular market. With brown poultry it is possible to breed a variety that makes a visual distinction between a hen and a cock. A young female is brown and a young male white. This difference is essential at a hatchery for layer chickens; males don’t lay eggs. The selection process is now less complicated and can be carried out by eye, by non-specialised staff. Using a conveyor belt, 20,000 brown and white chicks can be separated every hour. The difference in colour is irrelevant when it comes to broilers because both sexes are bred for meat production. 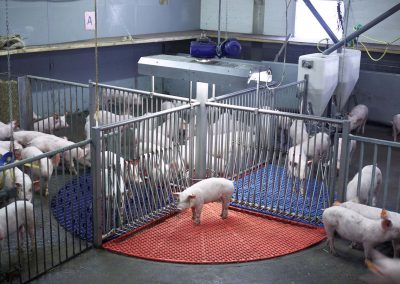 In the Swine Innovation Centre (VIC), Wageningen University is working with trade and industry on innovations in pig husbandry. Research on Pigsy, a toilet for pigs, began in 2012. Its development was informed by the pig’s natural behaviour. A pig usually looks first for a place to sleep and then – at a comparatively great distance away – a place to defecate. The research focuses on stimulating and facilitating this natural behaviour as much as possible within the confines of a standard husbandry company; piglets are trained early on to relieve themselves in a special corner of the shed. A major advantage is that the faeces can be collected at a single, central place and removed in a shorter time. This lowers the level of ammonia emissions within the shed; the advantage for the farmer being that there is no longer a need for air washers. 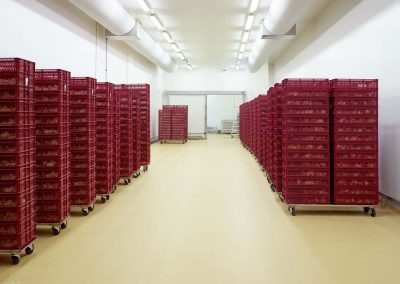 At the end of a production day, the chicks are left in a rest area. As buyers have no desire to receive a consignment of chicks in the evening, shipping is postponed until the next morning. The chicks themselves benefit from having time to recover from the stressful first day of life. Chicks can live for four days off the egg yolk still in their bodies. After a night’s rest, the chicks are shipped by lorry or plane; most will take two days to reach their destination. 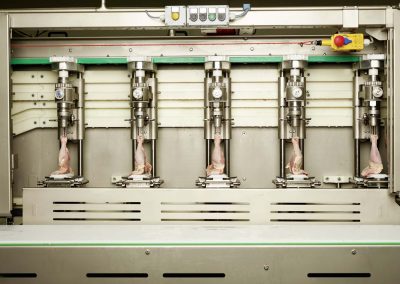 Meyn is one of the world’s largest producers of poultry slaughtering and processing equipment. The Meyn Whole Leg Deboner (WLD, here in a test set-up) has great success in producing chicken leg fillet. Every year, 8.5 billion of the world’s 32 billion chickens are processed in equipment made by Meyn. In the US, the company has a 70% share of the market. One key feature is that each machine can accommodate every variation of leg dimensions. As consumer preferences as regards to the size and width of chicken legs varies geographically, the company has developed machines that are easy to adapt to these preferences. 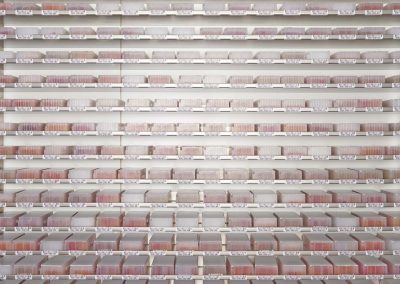 The GD (Gezondheidsdienst voor Dieren) works with farmers, veterinary practitioners, government and agricultural organisations to improve animal health in the Netherlands. Farmers can have their livestock checked by the GD for possible infections or other health problems. Armed with the results, the GD advises farmers on how they can avoid or solve problems. By comprehensively monitoring Dutch livestock, the GD can track down problems at an early stage and identify new diseases. The company boasts one of the world’s largest veterinary laboratories. 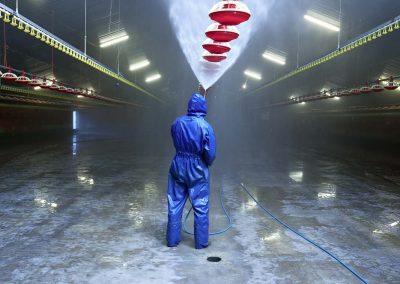 Peter Stroo has a broiler farm with 160,000 chickens, divided among three houses. In 2012, he had a ‘Patio system’ module installed: instead of day-old chicks, Stroo now gets pre-hatched eggs delivered. After each cycle, the two levels are washed and disinfected. Once the manure is removed, the whole area is cleaned with detergent and then thoroughly disinfected with a sprinkler. The process of cleaning takes three days for the ‘Patio system’ module and two days for the ground floor. 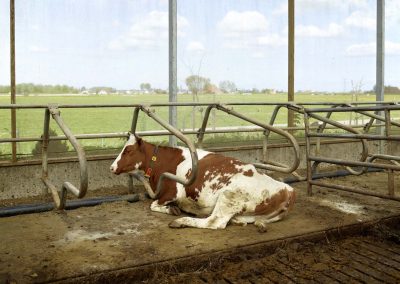 The Brandsma Dairy Farm (Melkveehouderij Brandsma) is a dynamic-organic company owning 55 cows and 25 sheep. Brandsma is widely known as an ‘ear-tag objector’. In all, there are 21 Dutch farmers who refuse to attach plastic tags to their animals’ ears. For them, ear tagging is a violation of the animal’s integrity. After 20 years of legal wrangling, these farmers are allowed to register their animals using the traditional I&R method. That is, hide brands and other surface marks. The sanction for not adhering to this legislation is a 20% penalty on EU surcharge rights. For six months of the year, Brandsma’s cows have free access to the pastures around the barn. In general, they only venture indoors to be milked by the milking robot. Thirty percent of Dutch dairy cows graze on pasture. For the product to qualify as ‘pasture milk’, the cows need to graze outdoors 6 hours a day, 120 days a year. 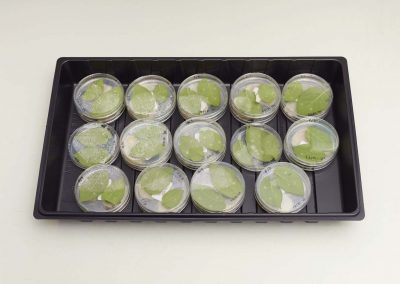 Wageningen University carries out research under the name of DuRPh (Durable Resistance against Phytophthora). The aim of this in-depth, applied research project is to develop the prototype of a potato variety that is both durable and highly resistant in the long-term to the main potato disease, Phytophthora (late blight). Like Downy Mildew, Phytophthora is an oomycete that attacks the cells of the leaf and spreads rapidly. The trouble with this water mould is that it adapts at DNA level, therefore rendering fungicides less effective. The plant disease has caused problems for centuries, most notably during the Great Irish Famine (1845-1850). Using genetic modification, ‘trial potatoes’ are given additional resistance genes from their wild relatives. In the Petri dishes, potato leaves are taken from plants with different resistance genes, after they were infected with late blight pathogens. 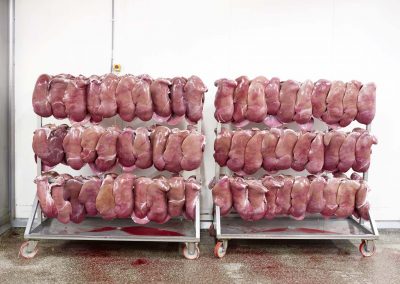 The veal industry took off in the Netherlands at the end of the 1960s as a response to the growth of the dairy industry, which had created a surplus of calves. The Ekro slaughterhouse processes 350,000 calves a year and is the world’s largest veal producer. The company is now an active component of the VanDrie Group chain of veal production companies. At other production sites, the group produces calf milk powder and roughage for their own calves, which they put in the care of calf farmers. A calf’s liver has an average weight of 4.5 kilos and, after removal of the carcass, cools off to 1º Celsius within 24 hours. The racks speed up the cooling process and prevent damage to the delicate organ tissue.